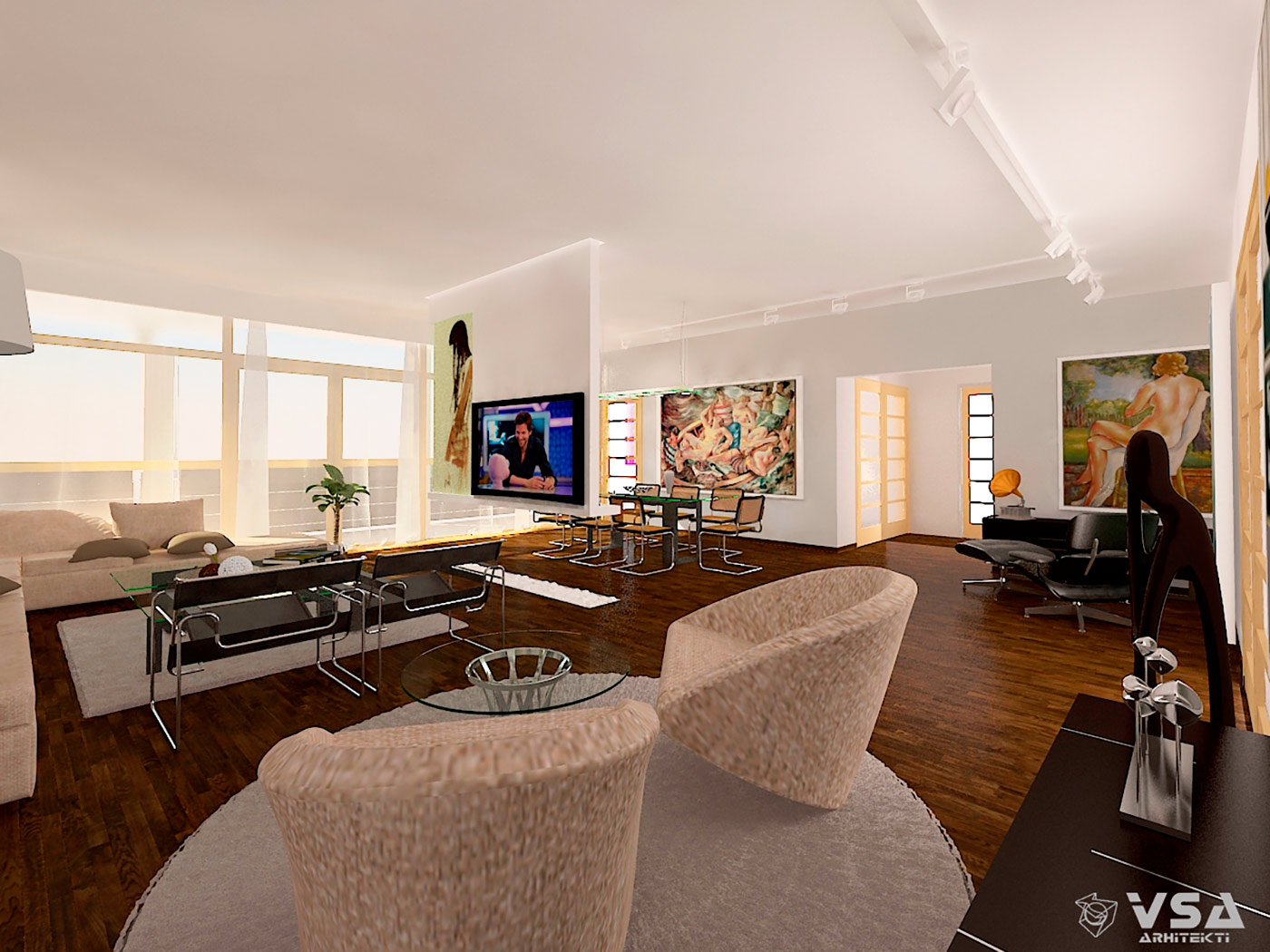 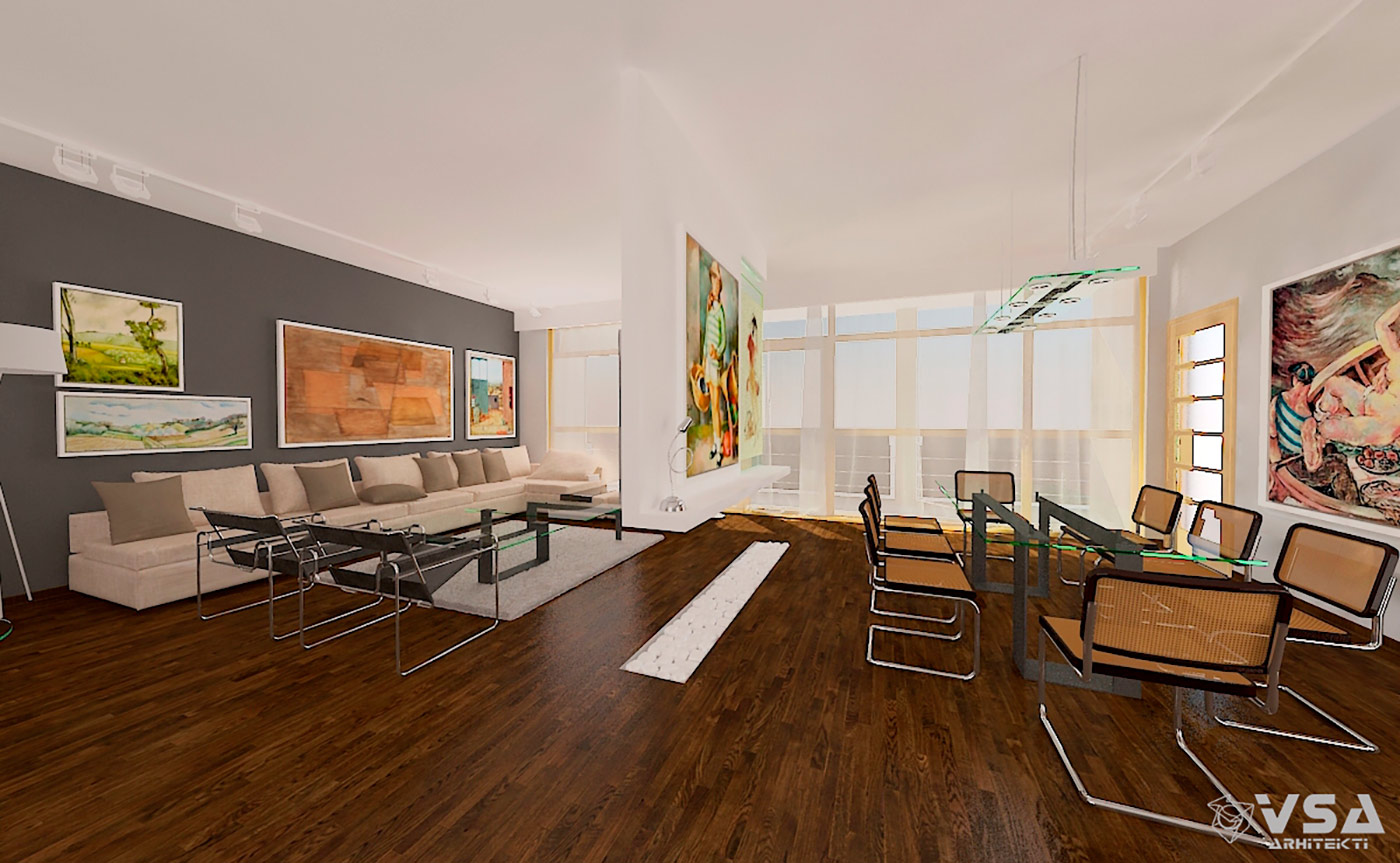 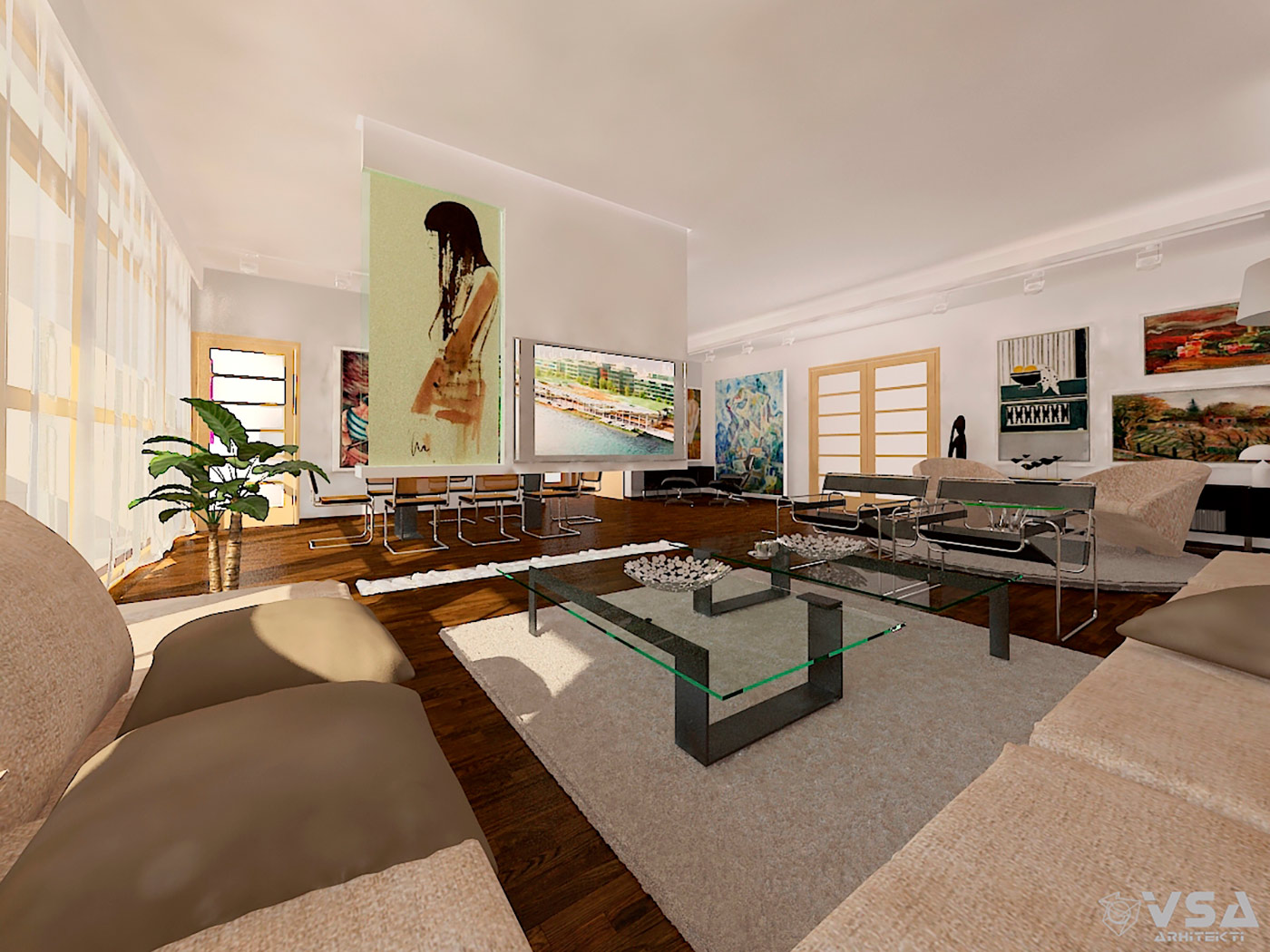 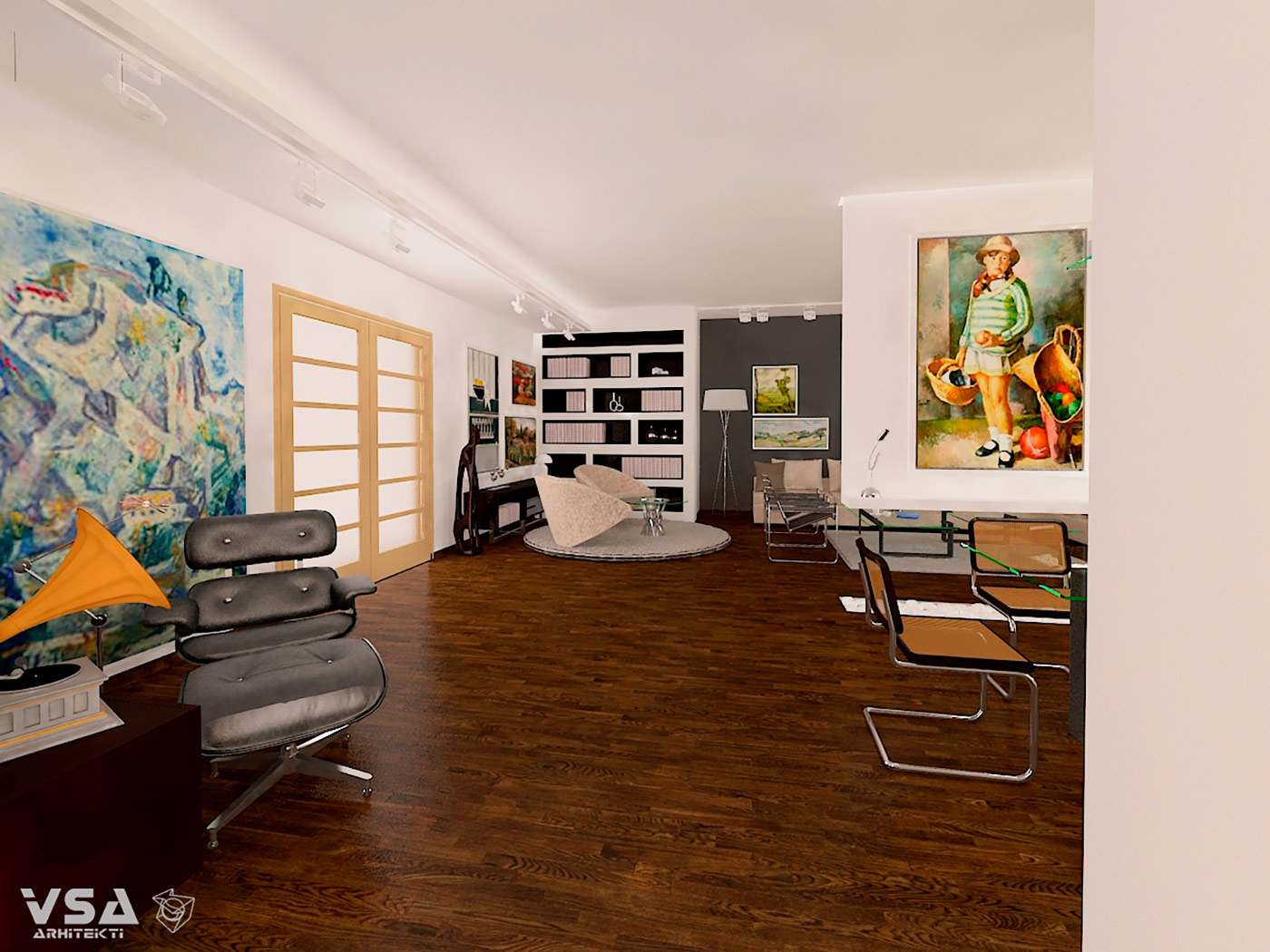 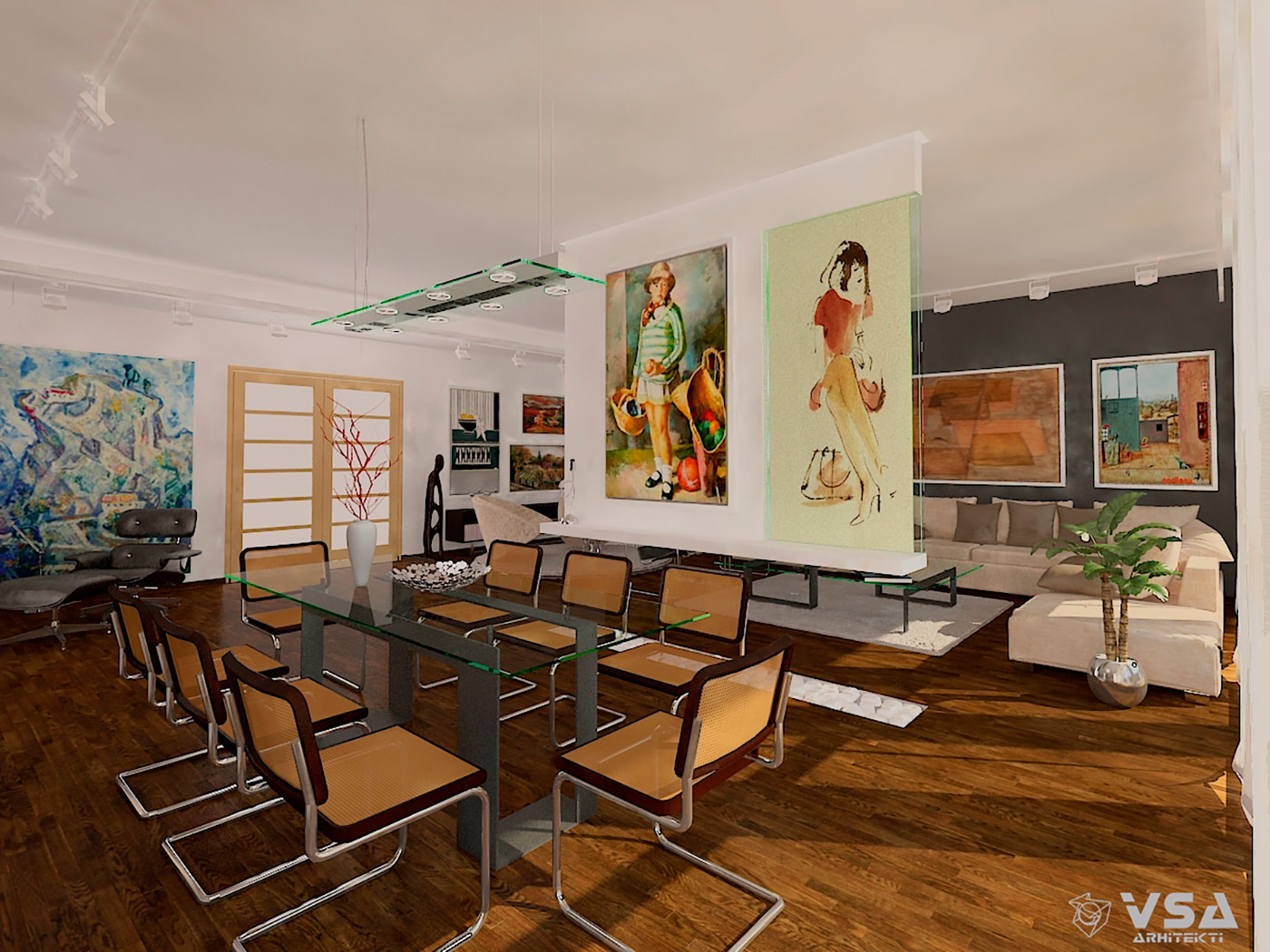 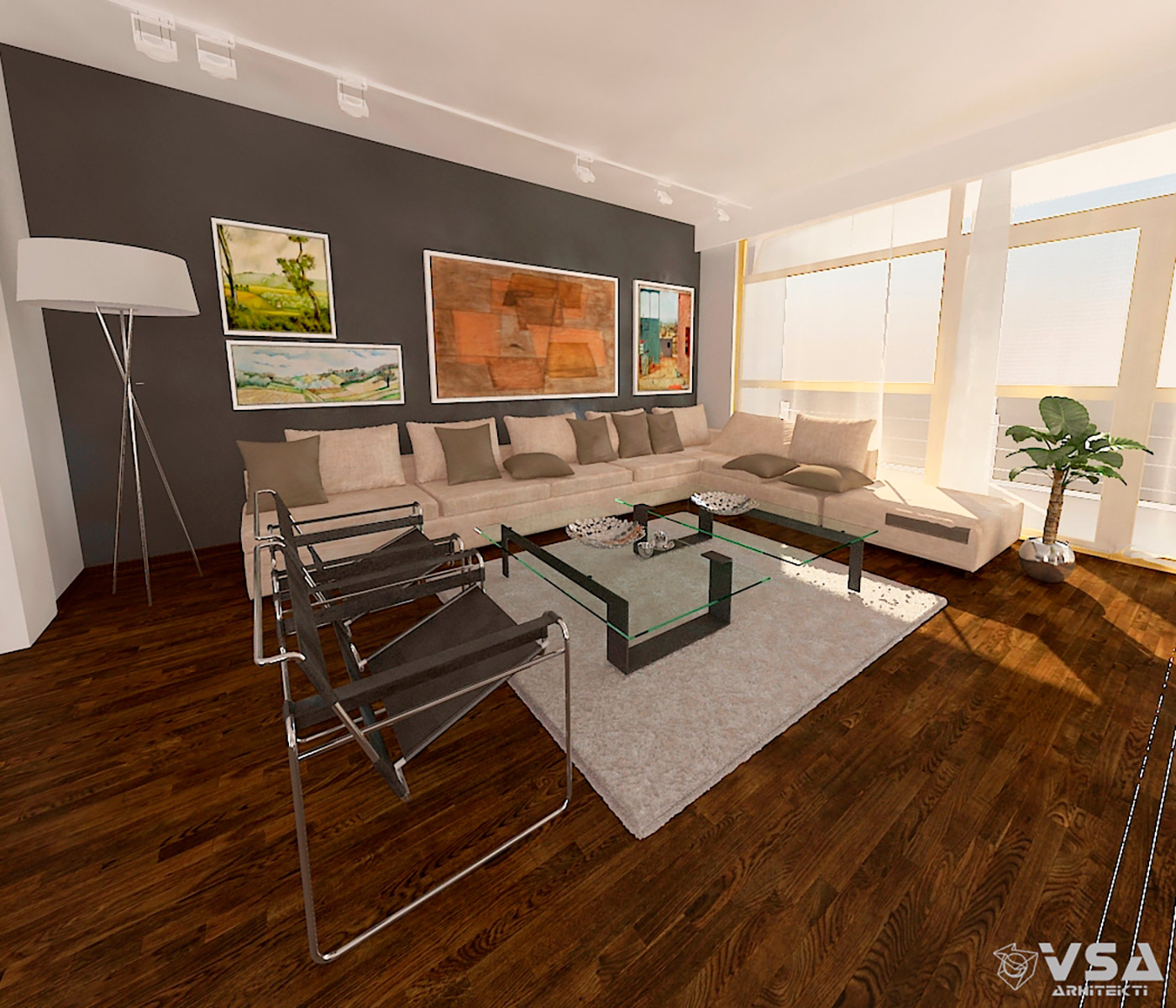 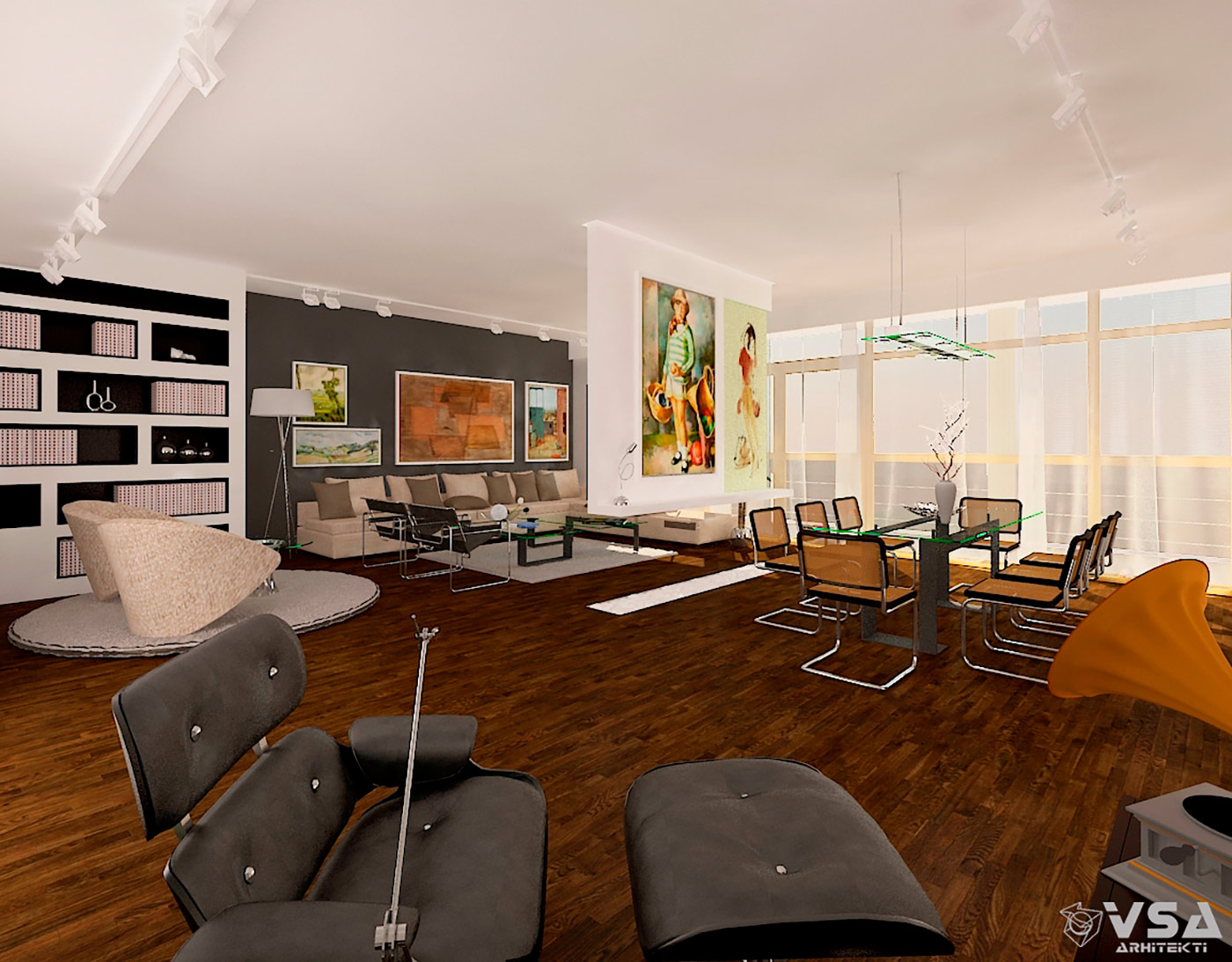 This project was presented to the investor as a suggested solution (the investor was not satisfied with the suggestions given by the architect who started renovating the flat), based on which we got the chance to work on the interior of the entire flat.
The investor had clear and specific requests which needed to be implemented into the interior: paintings, rare books, and a music corner. One of the more important details was a two-sided painting which needed to be exhibited in the living room. The investor also wanted the space to be free from excess details.
The architectural structure of the living room is based on a clean integral space, central to the flat and oriented toward a “glass wall” and large terrace which was the only source of natural lighting. By analysing the geometry of the living room we concluded that it had been planned for a wall to be retracted which would have allowed the central motif of the space to be placed there (for example, a TV composition) toward which the main sitting would have been oriented.
The terrace had wide double doors which were questionable in this space, regardless of the size of the living room itself. The parquet in the flat was a very sensitive segment which could have affected the final impression of the interior. Namely, it is a large surface but unfortunately also a poor interpretation of an idea of implementing wood into the interior (the colour and amount of glossiness do not differ from an industrial example of a floor, used more and more in home interiors but in a completely different context). The previous architect had installed the lighting for the paintings and a floor lamp for the dining table which gave us an insight into the idea they had regarding spatial divisions.
The analysis of the existing state relates to the couple of segments we deemed important in the new interior design, just as spatial and visual inputs, of course.

The first point we tackled was the parquet, which we commented on in the analysis of the existing state. We envisioned a darker parquet of a more natural hue and less glossiness which would raise the quality of the space (the room is large and therefore so is the floor surface which takes the whole space with it).
The next point relates to the huge openings toward the terrace. We suggested that a sliding door be installed in place of the existing one, thereby reducing the space they take up when it is opened. This suggestion was significant regardless of the concept design.
In the analysis of the existing state we stated that the previous architect had planned to retract a wall thereby defining the central motif of the space. We thought that the walls should be left as free as possible in order to accommodate paintings, and therefore we introduced a new central motif in the form of a hanging wall which occupies the central part of the living room, lowered to a certain height which does not visually disrupt the integrity of the space, which we recognised as an exceptional advantage of the flat. On this wall is the TV and sound system oriented towards the main sitting (see floor plan), with the paintings overlooking the dining room on the other side of the wall which also features a shelf. A special demand we had was a double-sided painted for which we utilized this wall, mounting the painting between glass verticals which constitute one part of the hanging wall.
To one side of the hanging wall is the living room, and to the other is the dining room. The main sitting was envisioned as a comfortable and cosy corner set with two armchairs (Breuer – these armchairs are made from bent aluminium and leather and do not constitute a visual obstacle from the living room entrance) oriented toward the now central motif of the space.
The position of the dining room suits the position of the lamp for the dining table. We envisioned the dining table and coffee tables as transparent pieces of furniture (steel and glass) in order to achieve visual integrity of the space.
We treated the rest of the free space, located to the left and right of the living room entrance and separated by main communication, as separate thematic areas. To the left of the entrance we envisioned a library in the wall which interrupts a series of paintings because we did not want to leave an impression of a gallery exhibition, but rather of a pleasant family space, which was primary. In front of the library in the wall is an open dresser, also for books, which is short and acts as a base for the paintings, emphasising their significance within the space (this motif was repeated several times in the interior design). In addition to that composition we envisioned the sitting which consists of two comfortable armchairs and a coffee table toward which the two armchairs from the main sitting can be turned around if needed.
The area to the right of the entrance constitutes the “music corner” consisting of a short dresser for CD’s, music devices and an armchair (by Eames) or an easy chair, for relaxing to music or reading.

Unlike with most classic interiors, the challenge here was to incorporate exceptional paintings into the interior. The furniture chosen corresponds with the paintings and constitutes a part of the composition with its shape and artistic effect.